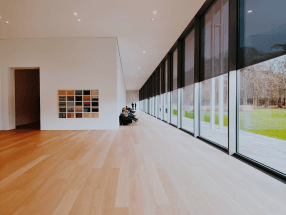 The facade of the building is a combination of the engineering power of new technologies, experience, art, creativity and the use of visual and visual elements together, and when it is designed based on principles and harmony, in addition to attracting the audience’s constant gaze, it can be free of limitations. Time and space become an eternal work. The facade of the building, like clothes, is considered to represent the identity and appearance of a building, which also shows us the character of the inside of a building.

The modern facade uses its own rules and regulations in the visual system and urban space. The use of vertical, horizontal and angular rhythms as well as new materials and new technologies add to the attractiveness and dynamism of the modern facade.

Visit examples of building facade design projects in other projects.